Chivas Brothers marketing director Glen Brasington has tied a year of positive sales for the whisky brand to a series of marketing experiments that are beginning to bear fruit.

Pernod Ricard announced last week that Chivas Brother’s Scotch whisky portfolio hit a sales upswing of 2.4% over the first half of the 17/18 financial year. 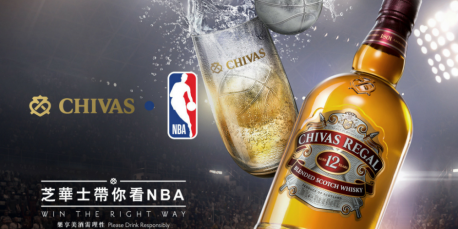 Much of the growth has come from Asia. Brasington said that, in tandem with the vital Chinese market returning to growth, its landmark partnership with the National Basketball Association (NBA) in the region, which also brought aboard broadcaster Tencent, has further bolstered sales.

This performance of this campaign shows how Chivas is running localised marketing efforts across the globe.

In China, as part of the NBA’s multi-year partnership Chivas, is running in-store activations, in addition to online sweepstakes and viewing parties. Furthermore, the sport, that is beloved in China features prominently in shops, bars and on TV.

“We have a really good route to market in China, when the company decides to activate a brand we get a lot of scale and consistency in the execution and that is key to driving growth,” said Brasington.

“What has changed in the last six months is that our sales team, distribution and customers have really got behind some of the big programmers that we have pushed into market, most notably, the NBA partnership.”

Through the partnership, and with Tencent on board as broadcast partner, Chivas has enjoyed sizeable engagement on broadcast and digital channels. But success in this market is a self-fulfilling prophecy with the company now gathering more data to help direct its future marketing.

“We have a global target of 20m data points, we already have about 5m in China because the digital platforms are well developed, and we have been active in that space for some time,” he said.

“When you partner with the likes of Tencent who own a lot of the media rights as we have done with the NBA, you get access to a lot of that data and you use it to further retarget or drive more precision.”

Globally, the difficulty will be ensuring its own, and the third-party data, is effectively integrated across each of the brands in the Chivas, and Pernod Ricard family. Each brand in the stable serves a purpose, Ballantine’s (up 2.2% in sales for the period) is “a really good vehicle to introduce people into our international brands and specifically scotch”. Meanwhile, Glenlivet, up 1.3%, is in a period of transition.

“We are raising the price on our 12-year-old products because of scarcity and introducing founders reserve that has done a good job of recruiting people,” he continued.

Read more at The Drum: http://www.thedrum.com/news/2018/02/19/how-chivas-working-with-the-nba-drive-whisky-sales-china