If a sponge can be a cartoon star, why can’t a jiggly blob of gelatin? That’s why the Jell-O brand has partnered with DreamWorksTV to launch an animated series. 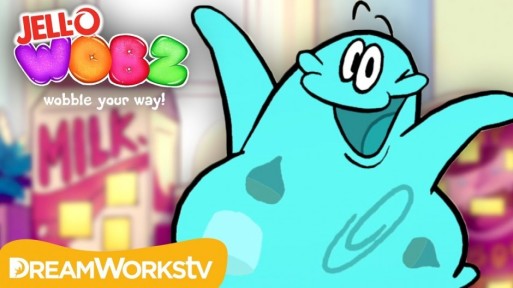 Jell-O recently launched Jell-O Play, a new line of Jell-O gelatin toys designed to inspire parents and kids to engage in free play and fun. As part of that platform, the brand is launching its new animated series, The Jell-O Wobz, on DreamWorksTV’s YouTube Channel and Amazon Prime Video.

The series focuses on embracing imperfection, a theme that resonates with both parents and kids, and is comprised of six episodes that follow the Wobz, a group of amiable Jell-O characters cast from humble kitchen objects, in their adventures through a fantastical kitchen world.

In the first episode the show’s protagonist, Bucket, is introduced, accidentally brought to life when Jell-O powder gets knocked into a bucket and mixes with a variety of leftover kitchen junk. At first, Bucket feels ostracized by the other Jell-O shapes, but after meeting more Wobz, he realizes that all have their quirks and differences.

Each episode, which lasts approximately four minutes in length, follows Bucket and his new friends through different adventures.

Read more at The Drum: https://www.thedrum.com/news/2018/08/02/jell-o-teams-with-dreamworkstv-launch-wobz-animated-series