This drink will get you high, just don’t call it a beer: Craft brewer Lagunitas, a unit of Heineken, said Tuesday that it will start selling Hi-Fi Hops in California, an “IPA-inspired” sparkling water infused with THC.

THC stands for tetrahydrocannabidinol, the ingredient in cannabis that makes you high. California legalized recreational marijuana as of Jan. 1, clearing the way for psychedelic drinks like this one. The new entry from Lagunitas, one of the largest craft brewers in the country, signals that pot-infused drinks could be poised to enter the mainstream. 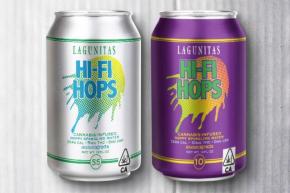 Other larger brewers have begun making moves to capitalize on the cannabis craze, but none have taken the leap to sell something with the narcotic properties of Hi-Fi. Corona parent Constellation Brands late last year bought a stake in Canadian marijuana company Canopy Growth Corp. and signaled that it would develop cannabis-infused beverages. But Constellation said it would not sell pot products in the U.S. unless marijuana is legalized nationally.