The trailer for Chance the Rapper’s film debut has landed, and the hip hop star’s pizza-centric horror-thriller-slasher Slice seems rather, uh, all-dressed. 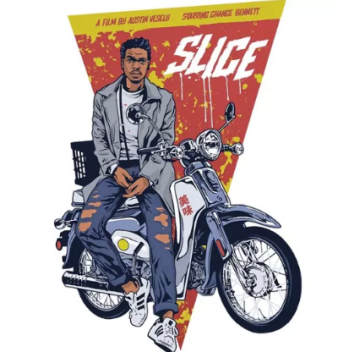 Bearing the tagline “Dead. In 30 minutes or less,” Slice traces the aftermath of a murdered pizza delivery driver, leading to a bloody romp loaded with a portal to hell, stabbings, car-crushings, and Chance morphing into a werewolf.

Chance himself is key to the plot, playing a not-quite-human pizza delivery driver, alongside a cast that includes Zazie Beetz (Atlanta, Deadpool 2) as some kind of paranormal investigator, Paul Scheer (Veep) as the pizza store owner, and Hannibal Buress as a man exclaiming “oh, damn.”

In 76 seconds of trailer, it’s not easy to parse the exact plot, but here are a few takeaways: