How the film’s food scenes prove both seductive and sinister 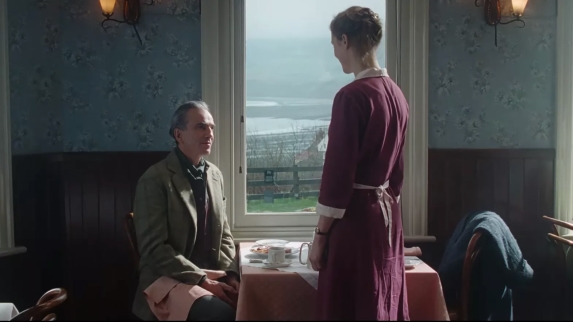 In Paul Thomas Anderson’s Phantom Thread, which was nominated for six Oscars this week, food is used as a weapon in a struggle for control. The breakfast table in the film’s early moments is Chekhov’s rifle on the wall. Dressmaker Reynolds Woodcock’s (Daniel Day-Lewis) reaction to morning sweet pastries, borne by his soon-to-be-former muse, offers up a clue in the first minutes that the next two hours won’t be simply a period piece about midcentury couture. That first meal of the day sets up everything to come in a film as gorgeous as it is gripping.

Like Water for Chocolate or Julie & Julia may come to mind when you think of a “food movie,” but Phantom Thread has nothing in common with those films. Set within the world of high fashion in 1950s England, the film’s portrayal of food, as the New Yorker’s Helen Rosner has also noted, is pivotal but also subdued. The Second World War was over, but food rationing continued during the first four years of the decade. As one article, for the British history site HistoricUK.Com, puts it: “The 1950s were the age of Spam fritters (now making a comeback!), salmon sandwiches, tinned fruit with evaporated milk, fish on Fridays, and ham salad for high tea every Sunday. The only way to add flavor to this bland cooking was with tomato ketchup or brown sauce.” Great Britain was hardly a moveable feast in the middle of the 20th century. As a result, there are no excesses of colorful cakes, like in Sofia Coppola’s Marie Antoinette, and no lavish dinner scenes obsessing over ingredients, as in American Psycho.

Anderson’s latest is not about food, per se, but the movement of the story is driven by its characters’ appetites: What they eat, and how — and by whom — their food is prepared. Food is never used as a prop. Every beat is blocked with purpose; consumption, and being consumed, is central to the film’s final act. It is at the center of how the two main characters, played by Day-Lewis and Vicky Krieps, battle for control.