Until recently, the toughest Broadway theater ticket to come by was Hamilton, the 2015 hip-hop musical celebrating the travails and triumphs of founding father Alexander Hamilton. These days, 300 bucks can land you a seat somewhere in the second mezzanine, and the frantic rush for tickets is over. So what’s New York’s next hot ticket going to be? 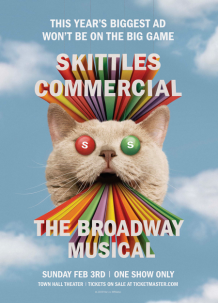 Very possibly, a musical revue about a chewy fruit candy.

Mars today announced it will stage a one-night-only musical themed around Skittles. “Skittles Commercial: The Broadway Musical” will debut (and close) on Sunday, Feb. 3, at The Town Hall on West 43rd Street.

As the name and date suggest, the play will run in lieu of a Super Bowl ad. It will also mark the second year Skittles has turned its nose up at the biggest sporting event of the year. 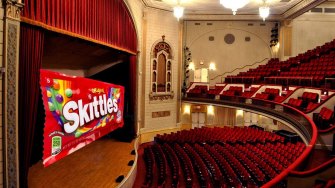 “Instead of running a 30-second ad in the game, we’re excited to be performing our first commercial as a musical,” Skittles brand director Debbie Litow told Adweek. The effort, she added, will be “uniquely Skittles and completely unpredictable in a way that only Skittles can do.”