Premiering on screens around the world today, George Clooney returns in his latest installment as a Nespresso brand ambassador, as he’s never been seen before. 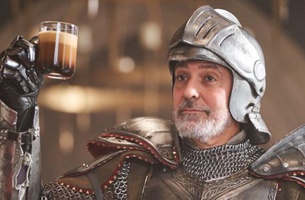 ‘The Quest’ sees George Clooney suited up in armor, majestically saving a medieval kingdom before hitting the streets of New York City on a quest to find his heart’s desire, the kingdom’s most exceptional coffee. Co-starring in the epic adventure is one of the silver screen’s most famous queens, Natalie Dormer, and the two feature in the largest global Nespresso campaign to date, launching in more than 30 countries.

A KNIGHT’S REWARD
‘The Quest’ is inspired by Nespresso’s own tireless pursuit of excellence in delivering exceptional coffee experiences. The 60-second TV commercial, backed by Peter Gabriel’s ‘Solsbury Hill’, is set in a medieval castle and George plays an honorable knight to a formidable queen. After slaying a dragon to save the Queen’s kingdom, George is offered a reward, which sets him off on a quest to find something he truly desires. His pursuit takes him from a medieval court to a movie theatre and on a double decker bus, proving he will stop at nothing to find his beloved Nespresso.