Pastrami, salami and matzoh ball soup super fans, rejoice. Starting in June, Katz’s is rolling out a subscription service so meat lovers outside of New York can get a variety of the deli’s products delivered to their door on a monthly basis. 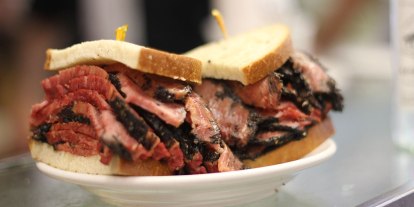 Katz’s Delicatessen, which sits at the corner of Houston and Ludlow streets in New York’s Lower East Side neighborhood, has been an institution in the city for over 100 years and was further immortalized in When Harry Met Sally. It’s been shipping orders since World War II, when its slogan was “Send a Salami to Your Boy in the Army.” The subscription service is the “next logical step” in its mail-order business, Jake Dell, Katz’s owner, said.

The service’s debut is a part of Katz’s 130th anniversary celebration, and the company has been plotting it for at least five years. Up until now, the company had a hard time finding the right technology to support it. “It was hard to implement, and hard to keep track of,” said Dell. Now, it’s ready.

Each month’s box will be different, and contain Katz’s merchandise in addition to food. The boxes are carefully curated with the seasons in mind, Dell said, and with the goal of introducing subscribers to more products. “We wanted to make sure it wasn’t just focused on the items people are most likely to order from us anyway,” said Dell. “And in August, you don’t necessarily want a whole lot of matzoh ball soup.”