The 30th anniversary of Shark Week doesn’t air for another three months, but Discovery is getting an early jump on its marketing campaign for the event. The network is partnering with Swedish Fish for a wide-ranging campaign that will include an ad, a mobile game and co-branded packaging. 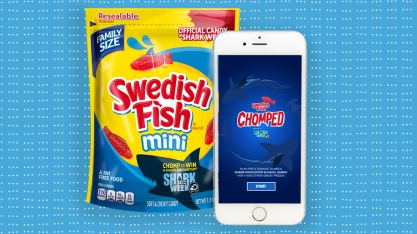 Swedish Fish will be the official candy sponsor of Shark Week, which debuts on July 22 on Discovery, marking the candy brand’s first time as a Shark Week partner. In addition to promoting the annual shark programming extravaganza, the partnership will promote the launch of Swedish Fish’s new Mini Tropical candy in a co-branded ad that will run across the entire Discovery Inc. portfolio during Shark Week.

The Shark Week logo will appear on the packaging of Swedish Fish’s 1.9-pound packaging, which will be sold nationwide throughout the partnership.

The brands are collaborating on a mobile game, Swedish Fish Chomped, set for release next month. In the game, which was developed by Vayner Media, users play as a shark with the goal of eating as many Swedish Fish as possible without gobbling any coral or jellyfish. Game users can also enter a sweepstakes to win a shark encounter opportunity in Oahu, Hawaii.