If you’re having trouble painting a Snapple-themed parking spot, you may want to try taking it up with Snapple itself, seeing as how well it worked out for Horatio, Arkansas high schoolsenior Fredy Torres. It all started back in August, when Torres had shown up to paint his school parking spot without much of a plan. With only two colors of paint available, options seemed limited, until he says, he realized they matched the colors of the Snapple bottle he was holding in his hand. 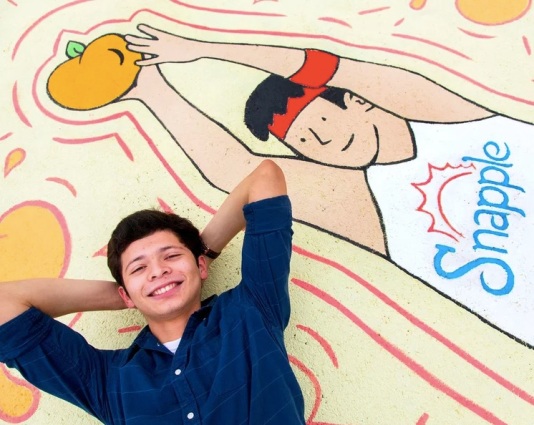 As a fan of Snapple, Torres decided to go for it, painting the Snapple logo alongside his name and graduating year on the yellow and blue. But then came the critical step: tweeting it at Snapple. Torres thought that maybe, sending the company a photo of the parking spot had a chance of getting him a few free Snapples, or something similar—and he was technically right.

“It’s the coolest thing ever really” Torres says, “the most I expected was maybe a reply back.” Since he had run out of paint during the initial painting, the upgrade certainly came through. And so did those free Snapples. The box of six he was presented with are each modeled after the parking spot, with basketball-themed flavors like “Mango Dunk Tea” and “Nuthin’ But ‘Nanas,” each of which include the image of Torres. “I don’t know if I do deserve this,” the humble Torres says of the Snapple operation that visited his town of barely over 1,000 people, “but it’s nice that they think so.”